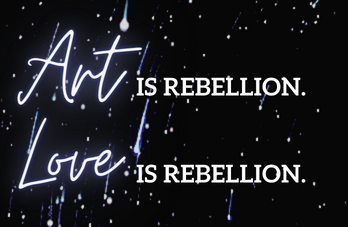 The rebel. A common archetype of teenagers for decades. A black mark across

the face of adolescence. Why does the world shame the rebellious?

pressure of both conformity and obedience. Who are they to restrict our identity?

Even listening to the way most adults speak of or to teenagers is degrading. One can

hear the disapproval in their voice. The invisible eye roll associated with “my teenage

daughter” or “teenage son” and what they’re up to. It seems that our rebellion has been

passion for us teenagers to create ourselves, in whatever radical measure that may

demand. This rebellion is the rejection of the boxes we feel have been placed upon us

for years. This rebellion is the resistance of authority as we learn how to step into our

own autonomy. This rebellion breeds artists, breeds scholars, breeds the geniuses and

leaders of each generation.

My aunt, Cyd Crouse, recently told me a story of herself in high school. She

fact that “[her] soul was screaming so loud [she] just couldn’t hear anything else.” I find

that this resonates with various high school students today. For many of us, the

pressure to be this or do that weighs heavily on our shoulders, catalyzing radicalism and

individuality. It seems that everyone has an idea of who we “should” be, but who do we

So when we teenagers fully embody what it means to be a rebel, it is not the

image of piercings and tattoos in which most parents today might assume. To be a rebel

is to be an individualist, a nonconformist, a leader courageous enough to stare in the

eyes of fear and authority with their chin held high. To be a rebel is to ask questions. To

push limits. To forge ahead into a new depth of life. To accept what it means to feel.

Allowing ourselves to feel on such a level that oftentimes, our only known

response is the defiance of all that we feel might hold us back, tie us down. As we age

and near the peak of adolescence, we learn what it means to alchemize our emotion

and passion into the creation of an identity in this world. And for a time, this must look

like rebellion. It is the bottling up of so much passion that we must learn to fuel our

To me, the world is in desperate need of more rebellion- the kind I speak of here.

fear, against mundanity, against submission. When we look up and see what today’s

normal is, why would anyone want to conform to such fear, darkness, and division? Art