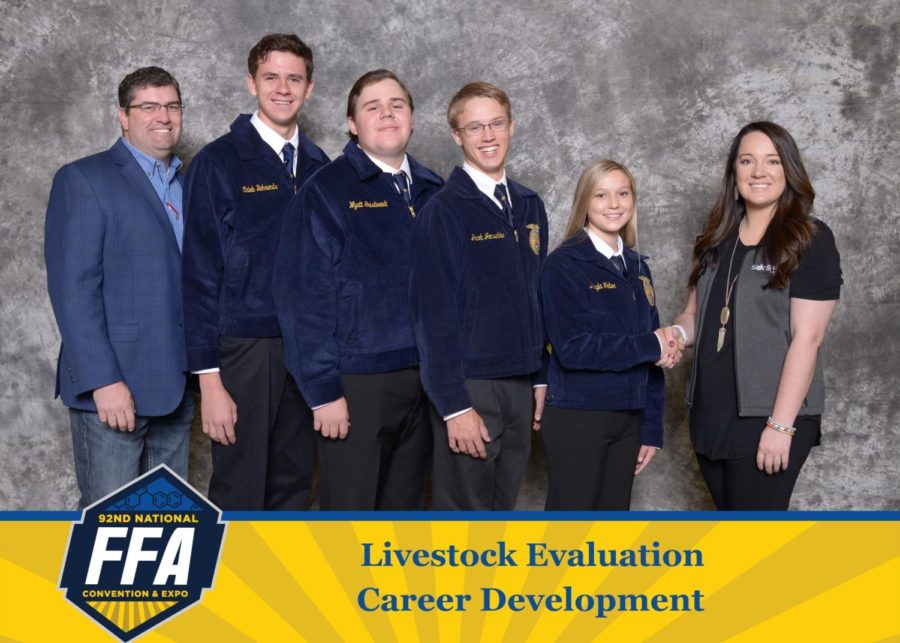 Another field that Fredericksburg High School has been known to excel in is their agriculture program. For the second time in three years, Fredericksburg’s Livestock Judging team will advance to the international competition in Scotland.

“The team that competed at the national FFA contest was Caleb Behrends, who’s already graduated, Kayla Feller, Wyatt Geistweidt and Jacob Jenschke,” the team’s coach, Patrick Padgett, said. “They will advance to internationals in Scotland.”

“There’s multiple different things included in livestock judging at the national level,” Padgett said. “The main part of it is where they have to judge classes and the classes are made up of four animals: beef cattle, sheep, goats and hogs, and they have to rank them from which one they think is the best and which one they think is the worst based on industry standards.”

The team consistently scored high and rose above competition, with Jenschke placing 12th in the nation, Geistweidt placing 13th, Behrends at 15th and Feller coming in 31st.

“Forming a strong team is a combination of a lot of things,” Padget said. “I like to think that I’m qualified to teach them what they need to know in order to be successful, but the drive and dedication to doing well has to come from them. I just have to try to give them the opportunity to take advantage of.”

The international competition will be held in Scotland in June 2020 and will require around $5,000 per participant.

“We are fortunate to live in a very giving community that funds it for us,” Padgett said. “We’ll have a fundraiser in January at the Gillespie County Livestock Show, and last year we were able to raise enough money to fund the entire trip, and hope to do so again this year.”

Although this year’s national champion team is now no longer allowed to compete together and try to return for a championship, the upcoming team has already begun their season and are raising high hopes from Padgett and the rest of the program.

“I’m very proud to be their coach and to be a part of this,” Padgett said. “I’m looking forward to next year’s group as well.”