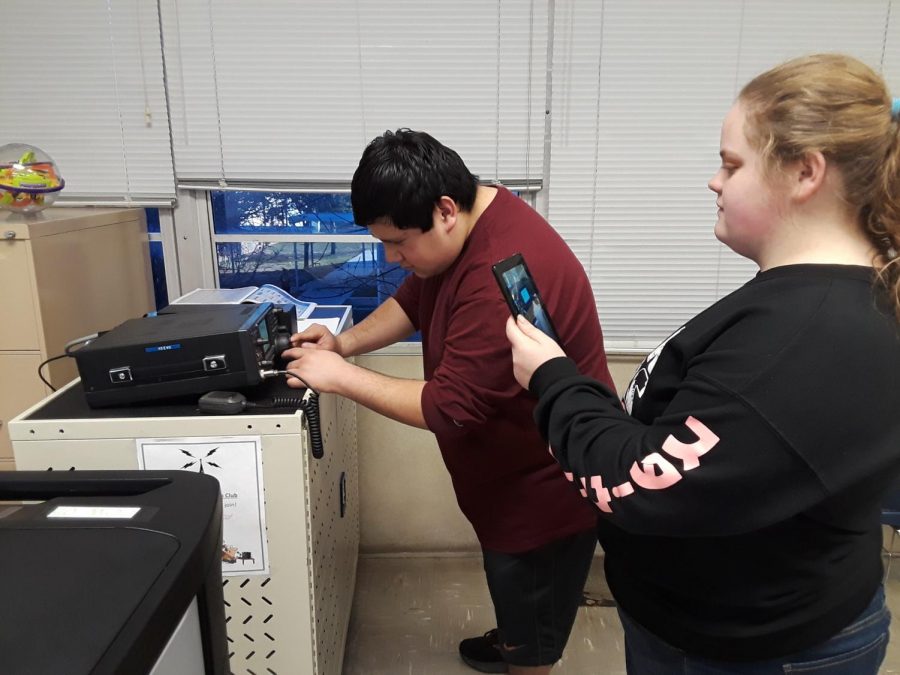 Members of the newly formed radio club work with the equipment to be able to communicate with others.

Amateur radio is a volunteer service for people who are interested in radio communications to get licensed through the Federal Communications Commission (FCC), and then be allowed to communicate throughout different frequencies globally.

“Within amateur radio there are different perspectives. Some people are interested in the electronic side of building – building things from scratch, making their own radios, their own antennas,” Keith Jenkins, one of the Fredericksburg High School Ham Radio Club sponsors, said. “Then there’s the other side, and that is the ability to communicate worldwide.”

Ham radio has more sides than just radio communications, and Jenkins, along with co-sponsor and Spanish teacher, George Burns, want to bring that to the attention of Fredericksburg High School.

“We decided to build this club to allow students who have an interest in how radios or electronics work,” Jenkins said. “We’re trying to incorporate soldering skills, and we also want to build their confidence to make communications.”

Jenkins has had an interest in ham (or amateur) radio, and he wants to give students at FHS the opportunity to learn about the world of ham radio as well.

“We want to open their minds to this world of communication beyond the cell phone,” Jenkins said. “Sure, we can send text messages and emails, but this is a different way to communicate.”

Jenkins wants to teach students there is more to the world than they think, and he feels he has found a great opportunity to do just that.

“There is a big push for something called Schools on the Air, where different schools around the country will start transmitting out,” Jenkins said. “There are several around the state, and we are trying to communicate with them.”

Jenkins wants to open this opportunity to everyone and has made it very easy to join the club.

“There are no fees. There are no entrance qualifications. Anyone is welcome,” Jenkins said. “We have donated equipment from local radio operators, and we have received a grant so we can buy more equipment. There is no cost to the student.”

The accessibility of the club opens many options to students who normally couldn’t participate.